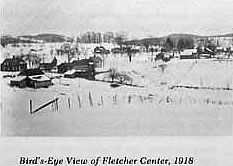 The tiny village of Fletcher, Vermont proved to be the most provisional of the provisional escape communities we studied. Fletcher’s experience during the 1918–1920 influenza epidemic may simply have been shaped by good fortune, remote location, and viral normalization patterns.

Fletcher, Vermont, is a small, rural, remote village located in Franklin County, approximately 35 miles northeast of Burlington. In 1918, only 737 people lived in the 38 square miles composing the town of Fletcher, (a population density of 19.4 persons per square mile). In comparison, the population density of the entire state of Vermont (with just over 350,000 residents) was 37 people per square mile. The tiny village of Fletcher was chartered in 1781 from land granted to a group of influential state political and military leaders. The leader of this group and the town’s namesake, General Samuel Fletcher, was a former French and Indian War veteran and member of the Continental Army during the Revolutionary War.

Response to Influenza in Vermont

Vermont health officials took early action to monitor and prevent the spread of pandemic influenza across the state. In late September, ahead of most other states, Vermont health authorities declared influenza a “contagious and infectious disease,” thereby adding it to the list of reportable diseases and giving local health officers authority to visit and placard the homes of patients. In the set of instructions to local health officers, the state Board of Health also advised the home isolation of the ill and the use of handkerchiefs or napkins by patients. Although it was not made a public decree, the ill as well as their families were advised to refrain from attending public gatherings, movies, or other forms of entertainment, and were asked to keep their children out of school. Health officers were advised to isolate patients for at least one week, and to ask those who had been in contact with the ill to quarantine themselves for four days from the time of exposure. Public funerals were allowed, but with the provision that those who had been in close contact with the deceased or who were ill themselves would not be allowed to attend. For the time being no further action was recommended or required. In fact, the director of the state Board of Health, Dr. Charles Dalton, notified local health officers that no general closure order for schools or public places was likely, though he did make it clear that state law allowed local officers to order closures and enact other NPI.

By the last week of September it had become clear that several areas of Vermont were in the midst of an influenza epidemic. According to the Board of Health, practically all of the cases at this point were among those who had traveled to Camp Devens, Massachusetts, to visit ill family members there. The Vermont cases, however, appeared to have been milder than those observed at Camp Devens, and as a result, the Board of Health did not believe that any wider action was required as yet. Meanwhile, several towns had taken independent action to prevent or mitigate the spread of pandemic influenza. Stowe, Rutland, and Shelbourne, for example, enacted public closure orders, closed schools, cancelled church services, and prohibited public gatherings. Other areas that had begun to experience influenza cases followed suit.

By the first week of October, the influenza situation in Vermont had grown serious enough to warrant more centralized and decisive action. On October 4, Governor Horace F. Graham, like many other governors across the U.S., enacted a statewide ban on public gatherings. All schools, churches, movie theaters, and places of public entertainment and gathering were closed, and public assemblies were prohibited. Local health officers were directed to enforce the order until further notice from the Board of Health. That notice came one month later, on November 3, when Governor Graham ended the closure order.

In the end, Vermont experienced 43,735 reported cases of influenza between mid-September 1918 and February 1919. Of this number, 1,772 deaths occurred in 1918 alone. Given the likelihood of underreporting, the number of actual cases may have been more than 50,000. Despite the state’s rural nature and the geographic isolation of many of its towns and villages, more than 12 per cent of Vermont’s residents contracted influenza during the second wave of the 1918–1920 pandemic, and 0.5 per cent of its population died as a result of influenza complications.

Fletcher and the Influenza Pandemic

Information regarding Fletcher’s specific experience during the influenza pandemic is scant. The pandemic certainly did reach the general area, as St. Alban’s—the nearest town of significant size (15 miles away; population 7,588 in 1920)—had experienced enough influenza cases by September 27 to close its schools, have its hospital overcrowded with patients, and require extra lay nurses.

Meanwhile, Fletcher residents engaged in activities that increased their contact with others and from the wider region. For example, in mid-September, as the disease was spreading across the area, a Red Cross dance was held in Fletcher. A few days later, many Fletcher residents attended the county fair in the neighboring and larger town of Essex. On September 18 a solider from Camp Devens, Massachusetts, arrived in Fletcher for his wedding and 120-guest reception. By this time Camp Devens was in the midst of a major influenza epidemic: more than 14,000 cases (28 per cent of the camp’s population) and 757 deaths occurred in the month of September alone. With a good amount of fortune, Fletcher did not suffer an outbreak of influenza as a result of these potentially risky social interactions.

Fletcher did experience at least a few individual influenza cases, however. On October 30, the St. Alban’s newspaper reported that one Fletcher woman was ill and that another, Mrs. L. H. Scott, had recuperated enough to leave her home. The Scott household had been quarantined, the only recorded case of quarantine in the town. In early January 1919 the newspaper reported that two Fletcher residents had fallen ill, and that one school had been closed on account of influenza. Yet it appears that no deaths resulted from these few cases.

As mentioned above, the amount of primary source material relating to the Trudeau Sanatorium and the 1918–1920 influenza epidemic is minimal. Digitized sources include:

Vermont Board of Health Laws and Bulletins