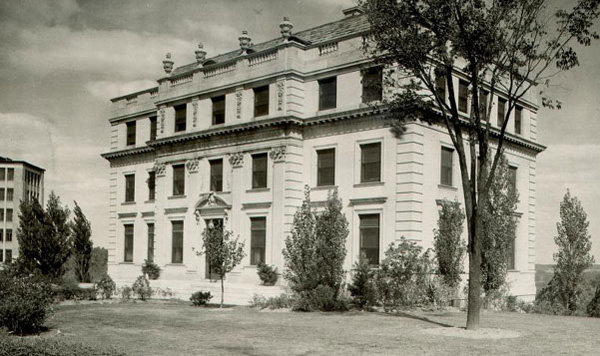 Once again, this past year has been a productive one for the Center for the History of Medicine. Hewing to its mission of research, teaching, public programming and outreach, the Center has been involved in a full slate of interesting projects and events over the course of 2016.

As part of its ongoing annual collaboration with the Michigan Theater’s “Science on Screen” series, the Center once again co-sponsored the screening of a medically related film followed by a lecture. This year we featured the film Erin Brockovich with a talk by the distinguished historian of public health Professor David Rosner, who has spent much of his career studying the history of the lead paint industry and the impact it has had on children and families exposed to it. Given the recent and ongoing crisis with the Flint water system, this was a particularly apropos film to screen. The audience – a large and diverse group made up of members from the University and the general public – was very interactive, and asked many questions of Professor Rosner.

In March, the Center hosted its 15th Annual Horace W. Davenport Lecture in the Medical Humanities. This year we invited Sara Rosenbaum, Professor of Health Law and Policy at George Washington University. Professor Rosenbaum has devoted her lengthy career to the issue of health justice for medically underserved populations, including working with several presidential administrations and Congresses. In her lecture, “Access to the Courts, Justice for the Poor: A Case Study of Medicaid,” Professor Rosenbaum discussed her work on health justice and the history and the challenges of providing healthcare to underserved populations through the Medicaid system. The event was held in collaboration with the U-M School of Public Health, and was well attended by many public health and medical faculty and students.

In May, Dr. Alex Navarro, Assistant Director of the Center, was again invited to participate in two-day event at the U-M Rackham Graduate School on alternative career paths for doctoral students. The event included a panel discussion as well as mentoring workshops, where Dr. Navarro met with several advanced graduate students from across disciplines to share his insights on ways for students to pursue non-tenure track academic careers. This year the event proved so popular that he was invited back several weeks later for an afternoon session with advanced graduate students who were unable to attend the previous event.

In November, the Center invited Pulitzer Prize winning historian David Oshinsky to deliver a talk on his recently published book Bellevue: Three Centuries of Medicine and Mayhem at America’s Most Storied Hospital. The event, held in collaboration with the Ann Arbor District Library, was a huge success and was well attended by members both of the University of Michigan as well as the general public.

In addition to the various lectures and public events, the Center continued to sponsor the long-running Victor Vaughan Society for the History and Philosophy of Medicine, an organization for medical students at the University of Michigan. Each month throughout the academic year, approximately 30 to 40 medical students meet for a session, hosted by the Center, where we discuss various subjects in the medical humanities, including topics such as art, literature, history, and journalism.

The Center also continued its tradition of top quality research and scholarship. This past winter we completed our long-term influenza research project with the Division of Global Migration and Quarantine of the U.S. Centers for Disease Control and Prevention. Our work resulted in a major scholarly, qualitative analysis of the American urban responses to the 2009 H1N1 influenza pandemic and the use of school closures as a community mitigation strategy. It represents more than five years of research and analysis of thousands of media reports, federal, state, and local government documents, and oral history interviews of key public health and education officials. Our findings were published in the June 2016 issue of the Journal of Health Politics, Policy, and Law.

Four years ago, the Center launched its massive online collection of materials related to the 1918-1919 influenza pandemic, The American Influenza Epidemic of 1918-1919: A Digital Encyclopedia. This year, we released the second edition of this critically acclaimed collection, adding thousands of additional pages of contemporary medical journals, military reports, and other seminal scientific studies of influenza of the time. We hope that the second edition of our digital encyclopedia will continue to serve as the repository for scholars and researchers, public health practitioners, and lay people interested in delving into the history of the 1918-1919 pandemic.

Continuing our work in the realm of digital history, the Center has continued its collaborative project with the U-M Bentley Historical Library to digitize and make available its rich archival sources. A few years ago, we found the funding to digitize the vast collection of the John Harvey Kellogg, M.D. papers and we are now working with the Bentley to digitize the lectures and written works of the distinguished physician Dr. George Dock, the chief of internal medicine and pathology at the U-M from 1898-1908. The Center will contextualize Dr. Dock’s lectures with essays, annotations, and other writings on the history of medicine and medical education at the time. We will also make available a digital copy of Horace Davenport’s biography, Doctor Dock. We are confident that the this project will be a wonderful addition to the Center’s – and the University of Michigan’s – robust digital collection.

Personally, this also has been another productive year of scholarship, teaching, and outreach. One community educational outreach project I am especially proud of is a series of monthly columns on medical history I write for PBS NewsHour, many of which have “gone viral” and have become “the most downloaded essays” on the website. The most successful pieces centered on Ryan White, Lincoln’s assassination, and the death of Warren G. Harding. Moreover, I have served as the monthly medical historian guest on Cynthia Canty’s WUOM’s Stateside show, where we discuss my PBS NewsHour column on medical historical events. In addition, this past year I wrote three essays for NPR’s Science Friday website on the history of scientific words. This work reaches out across the state and nation and is a superb means of highlighting the scholarly efforts, and the “brand,” of the Center for the History of Medicine.

I remain the Editor-in-Chief of The Milbank Quarterly, one of the most respected journals of health policy and population in the United States and Europe. Having the Quarterly’s academic home at the U-M Center for the History of Medicine continues to bring prestige to the U-M medical school and to our unit.

Working with several colleagues in several units across the medical school, I also actively served on the UM medical school committee, under the leadership of Dr. Mary Blazek, to develop the first curriculum on the Medical Humanities Pathway of Excellence, which began this past Winter Term, 2016. It has already proven to be quite successful and it is a curriculum that, I predict, will only get better in the months and years to come. We offer this course to first and second year students and then will work with them to develop their “Capstone” research project during their 4th year.

In addition to teaching medical students, this fall term, 2016 I taught my very successful Literature and Medicine course for undergraduate students in the English department of the U-M College of Literature, Science and the Arts. This class is a wonderful outreach to the College as well as for the 35 students, most of them headed for careers in medicine. This year’s second-year U-M medical school class contains four former students of mine from a previous teaching of English 317, and three more matriculated this fall. These successes have proven to be extraordinarily gratifying experiences for me as an educator and they inspire me to continue to teach this class to subsequent undergraduates at Michigan.

Last but certainly not least, in addition to a host of articles for both the lay press and peer-reviewed journals, I am proud to announce that I have completed my book about the fascinating Kellogg brothers of Battle Creek, Michigan. Entitled Corn Flakes: The Battling Kellogg Brothers of Battle Creek, the manuscript is in the advance stages of preparation and will be published in fall 2017 by Pantheon/Alfred A. Knopf. It represents the culmination of several years of research and writing, the honor of a Guggenheim fellowship, and a great deal of learning for me as a historian and scholar. It is also a project that mostly takes place right here in Michigan, only 90 miles or so down the road from Ann Arbor.

Our hard work here at the Center has made for a fantastically productive and rewarding 2016. We are already planning for an equally impressive new year. In February 2017 we will be co-sponsoring another “Science on Screen” event at the Michigan Theater, this time showing the film Concussion with a lecture by leading U-M neurologist Dr. Jeffrey Kutcher to follow. In April, as part of the University of Michigan’s bicentennial celebration, we will be co-sponsoring a major conference on pandemic preparedness and response, featuring lectures by Dr. Anthony Fauci of the National Institutes for Health and Dr. Paul Farmer of Harvard University and Partners in Health, along with a panel discussion on the local, state, and federal responses to pandemics moderated by CNN’s Dr. Sanjay Gupta. It is events such as these, along with our top-notch research and scholarship, which continue to make the U-M Center for the History of Medicine the leading history of medicine unit in the nation.

I wish you the best wishes for a health, happy, and rewarding 2017. And please do not hesitate to contact me with any questions or suggestions.