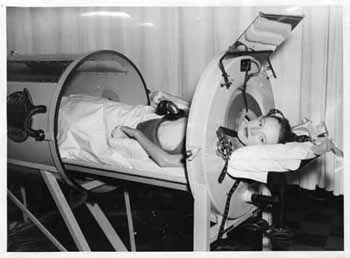 At one time in the United States, poliomyelitis was one of the most feared of the childhood diseases. No one knew how to prevent paralytic polio, and there was no cure. The hot weather of late summer was “polio season” bringing on a rash of new cases of paralytic polio. In the United States from the 1920s to the 1950s, the warmer months of the year were known as “nightmare summers of quarantine and contagion.”

Jane S. Smith described the speed at which polio epidemics became common occurrences. “At the start of the twentieth century, few people had ever heard of polio. It was not until the summer of 1916, when a devastating epidemic struck the New York area that polio entered into public consciousness. By the end of the summer, 27,000 people were paralyzed and 9,000 dead. For the next forty years, not a summer passed without an epidemic somewhere.”

Dr. Jonas Salk developed a promising vaccine against poliomyelitis, and the National Foundation for Infantile Paralysis provided $7.5 million to run the 1954 Salk vaccine trials. Dr. Thomas Francis Jr., chairman of epidemiology at the University of Michigan School of Public Health, evaluated the results of the vaccine trials, which proved the vaccine to be safe and effective. The historic announcement took place at the University of Michigan on April 12, 1955.

On the fortieth anniversary of the announcement, April 12, 1995, there was a celebration at the site of the original event at the University of Michigan. These pages chronicle that anniversary celebration.

The text is illustrated by photographs, speeches, letters, artifacts, and documents from original materials held by the Bentley Historical Library, the March of Dimes Birth Defects Foundation, and private individuals.

This project was a collaborative undertaking between the Center for the History of Medicine and the Bentley Historical Library and was supported by contributions from the March of Dimes Birth Defects Foundation. Special acknowledgments go to Andrea Richeson, Kathy Steiner, and Deborah Torres, students at the School of Information at the University of Michigan, and Anne Frantilla of the Bentley Historical Library for their work in digitizing the images and developing the database of images used in this exhibit.